The 18 lødige chamber loader rifles M/1846, M/1849 and M/1855 got used for several years and were often modified. An unknown number of these rifles were changed to be used with cartridges (Landmark), now designated M/1867 ( Navy).

After the the M/1867 rifles was changed, the rifles still used the original M/1846, M/1849 and M/1855 bayonets. Hence it is only possible to identify the 18 lødige M/1867 socket bayonet by looking at marking and numbering. There is uncertain if there was produced new socket bayonets for the modified M/1867 rifle. 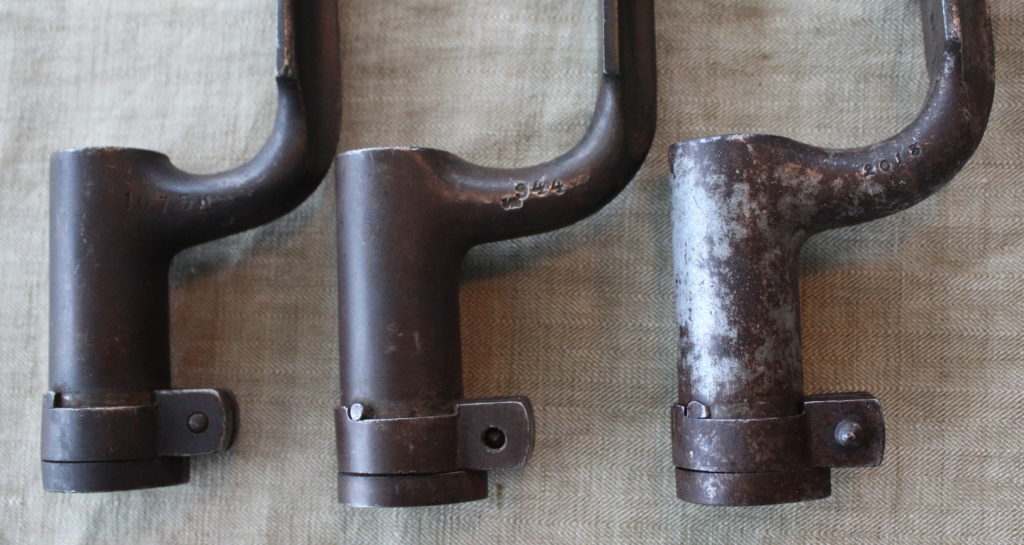 From left, bayonets produced in Herzberg, Liérge and Kongsberg.

The bayonet was produced by Kongsberg Våpenfabrikk in Norway, A. Francotte in Liége Belgium and Crause in Hertzberg, Germany.

By looking at stamps on the arm and blade, it is possible to identify the producer of the bayonet.

The production numbers in the table below comes from the kvf.no site and the very good book on socket bayonets: Aarum and Sægrov, Døllebajonetten i norsk bruk.

In the beginning the scabbard came with a metal stud, used to secure it to the frog. In 1860 it was decided to replace the stud with a leather strap. The old scabbards, who got converted, can be identified by a filled hole where the stud used to be.