The M/1825 flintlock musket, was the first gun that was produced in larger scale at Kongsberg Våpenfabrikk (Kongsberg Weapons Factory). The flintlock was replaced with a percussion lock in 1841 (M/1825/41), and later rifled and modified to become tap rifle in 1851 (M/1825/41/51).

A unknown number of M/1825 socket bayonets were produced at Kongsberg Våpenfabrikk. The bayonet is not marked with a crowned K, like later bayonets produced at the factory. The bayonet got delivered to the Norwegian infantry. 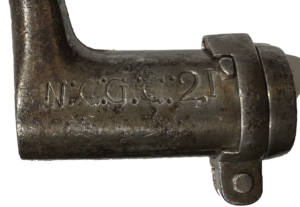