In 1967 the first deliveries of the new main rifle, AG3, was received by the Norwegian armed forces. The automatic rifle (select fire) replaced the M1 self loading carbine, M1 rifle (Garand) and the modified Mauser rifle, K98F1. The rifle was based on the German G2A4 automatic rifle, and was produced by Kongsberg Våpenfabrikk in Norway. The firearm has some smaller modifications from the standard G2A4. One of these is that the bayonet lug is different from the standard. Now the AG3 rifle is in Norway replaced by the Heckler & Koch HK416, but was until recently in use by the National Guard.

The bayonets used for the AG3 rifle, exist in two different main variants. In addition there exist black coloured variants used by His Majesty The King’s Guard (HMKG) 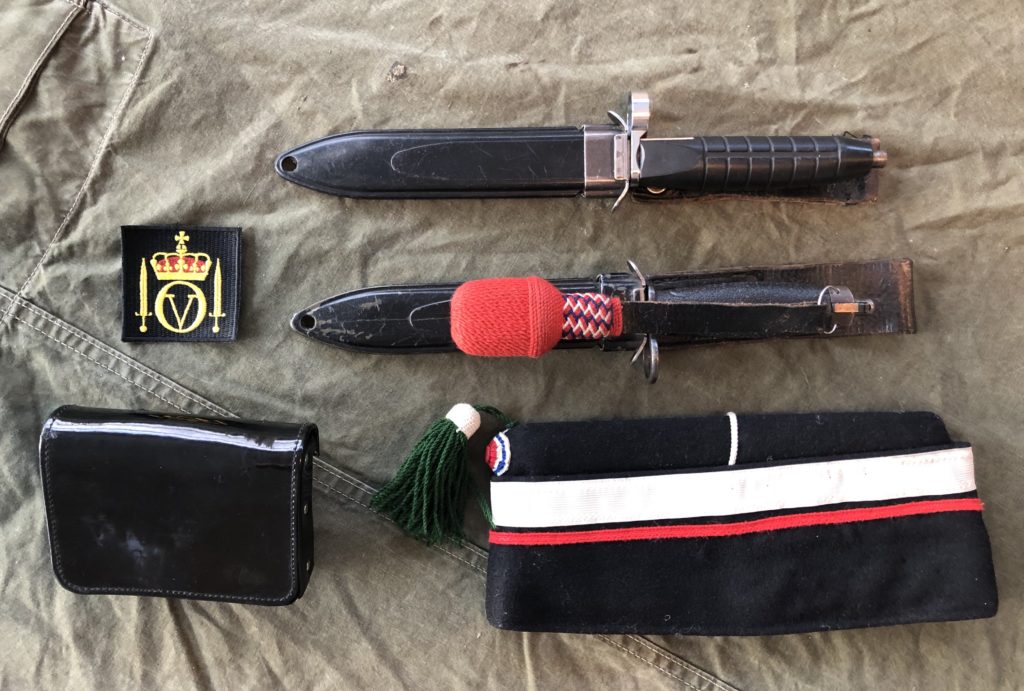 The earliest variant of AG3 bayonets, type 1, was produced from 1968 and was assembled at Vinghøgs Mekaniske Verksted AS. The grips was produced at Strømbergs. It was produced 171,500 bajonetter of type 1.

The Type 1 bayonet got a dumpy plastic grip. The grip is so short that it does not extend enough past the flame protection on the AG3 rifle.

HMKG ordered 1,500 bayonet of type 1. These got black plastic grips and black lacquered scabbards with integrated leather bayonet frog, for use with the belt used for parade.

The blade of some of the earliest AG3 bayonets was reused from US-M3 fighting knives. Some of these got markings on the blades. The earliest variant was marked with producer and 1943. Then there was some blades only marked with producer, but most of them was unmarked. It was also used blades from the M/1956 bayonet produced at Kongsberg Våpenfabrikk. One common identifier for the bayonets with modified blade, is that there is left marks after the vice that was used to remove the blade. 71,500 type 1 bayonet have reused blades. 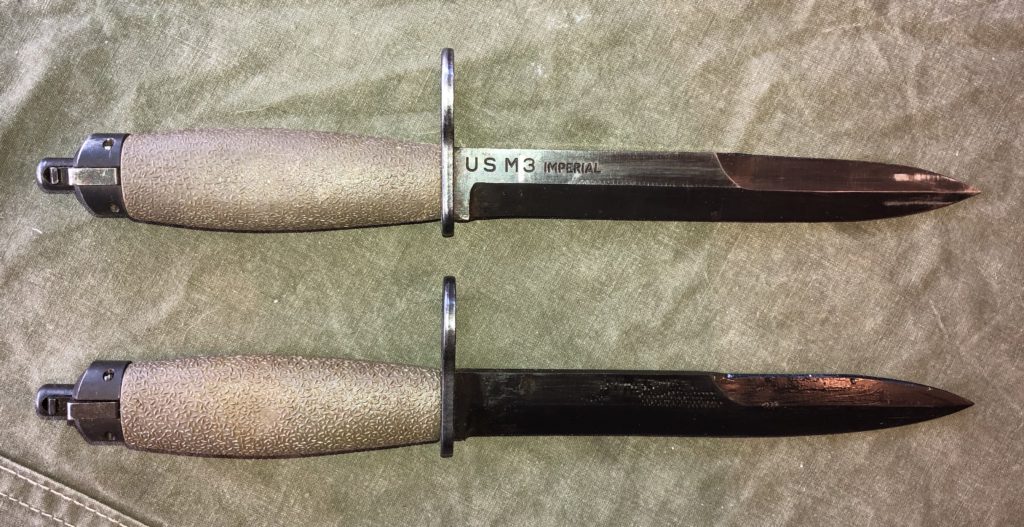 Two bayonets with reused blades. The bayonet on the top of the picture is marked U S M3 IMPERIAL. Notice the easily visible marks after the vice on the bayonet at the bottom.

There is several different types of scabbards for the type 1 bayonet. 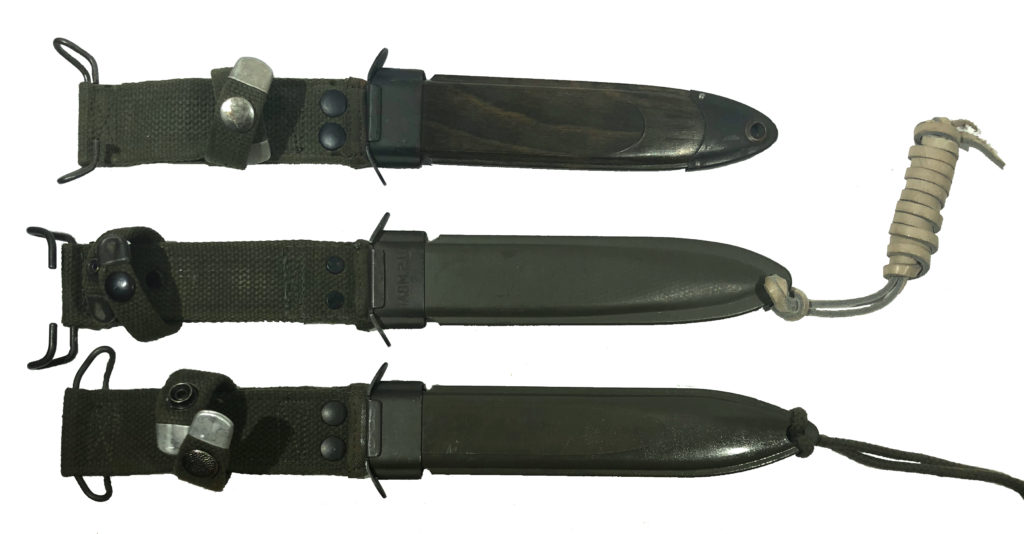 Some scabbards for the type 1 bayonet

The type 2 bayonets was produced in the 1980th to supplement the type 1 bayonets. This type got plastic grip with rifles with grooves. This type was produced by  A. Eickhorn GmbH in Solingen (AES) Germany. This type is a “standard” G3 bayonet. 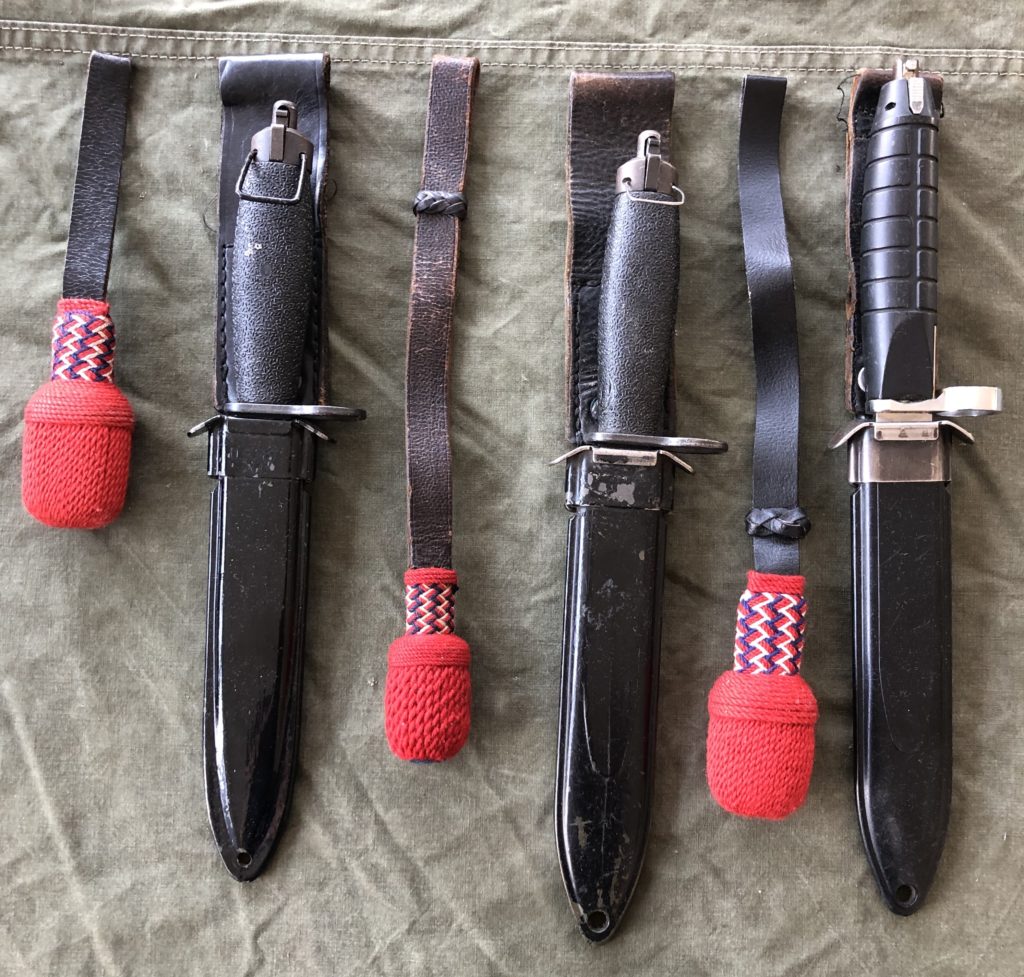 M/1968 bayonets and bayonet knots used by HMGK. The two to the left are of type 1, the one to the right is type 2. 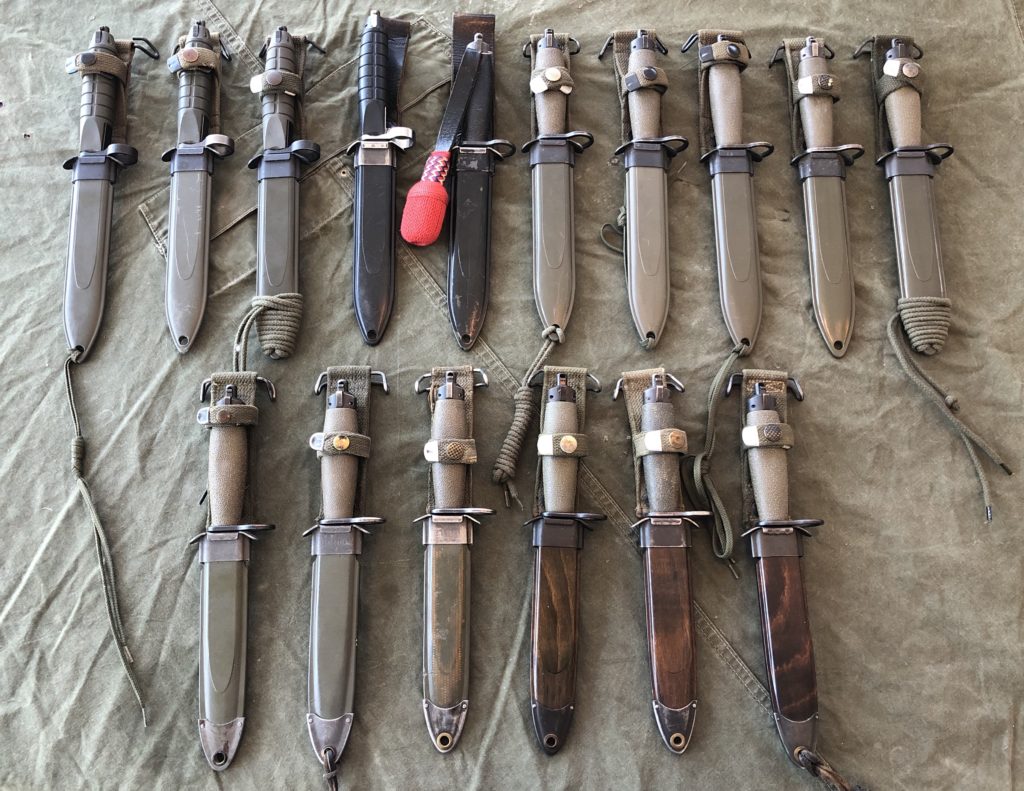 Some different variations of the AG3 bayonets