The Norwegian  M/1894 rifle got produced at Steyr i Austria and Kongsberg Våpenfabrikk in Norway.

The bayonets for the Krag Jørgensen rifle is different in the three countries. The first bayonet that was used for the rifle was the short M/1894 knife bayonet.

When the The Krag Jørgensen rifle got delivered from the factories it was matched with a bayonet with matching serial number. The bayonet was delivered to the Norwegian navy and army. 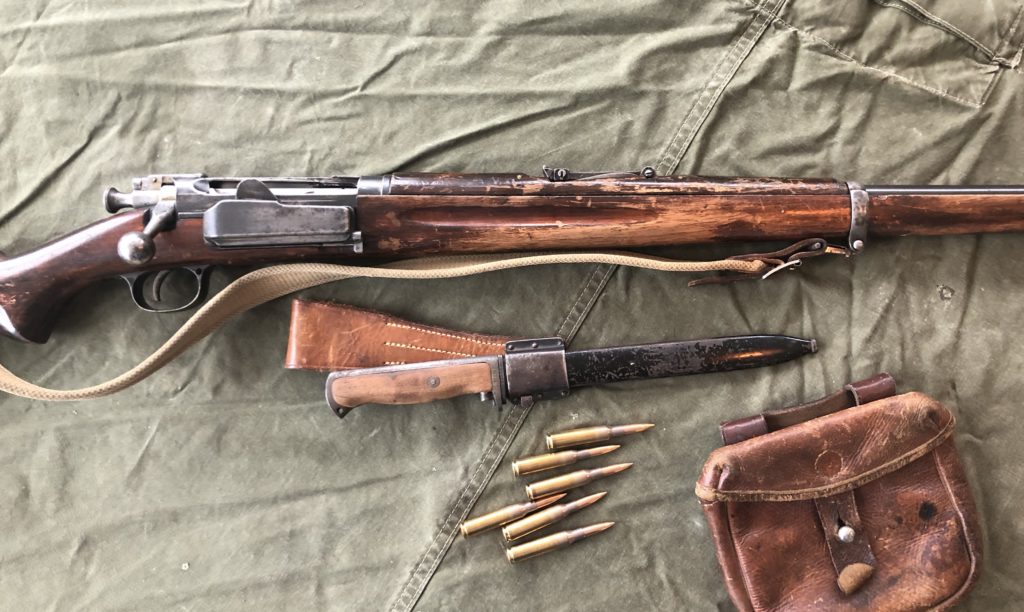 Information about the frogs for the M/1894 bayonet you will find here.

The scabbard got a small square on the back for securing it to the bayonet frog. On Kongsberg produced bayonets this is mounted in center of the scabbard. On Husqvarna and Steyr scabbards this square is mounted a bit to one side, and it is also a bit raised on one side.

The M/1894 bayonets produced at Husqvarna in Sweden quite rare and the producer mark of Husqvarna is similar to the one from Kongsberg, making the hard to identify. The pictured bayonet got serial number 21348. 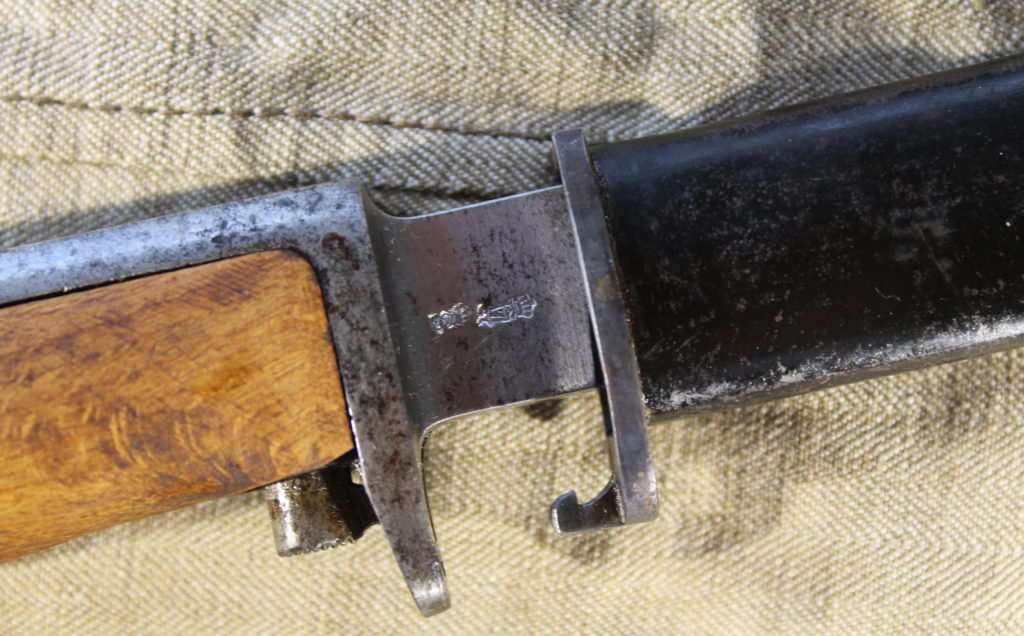 The M/1894- bayonets was normally delivered polished, but sometimes you can find blued M/1894 bayonets. The blueing is most likely done after WWII.

Many of the best M/1894 bayonets was after WWII converted to M/1956 SLK. This makes it relatively hard to find nice unmodified bayonets. 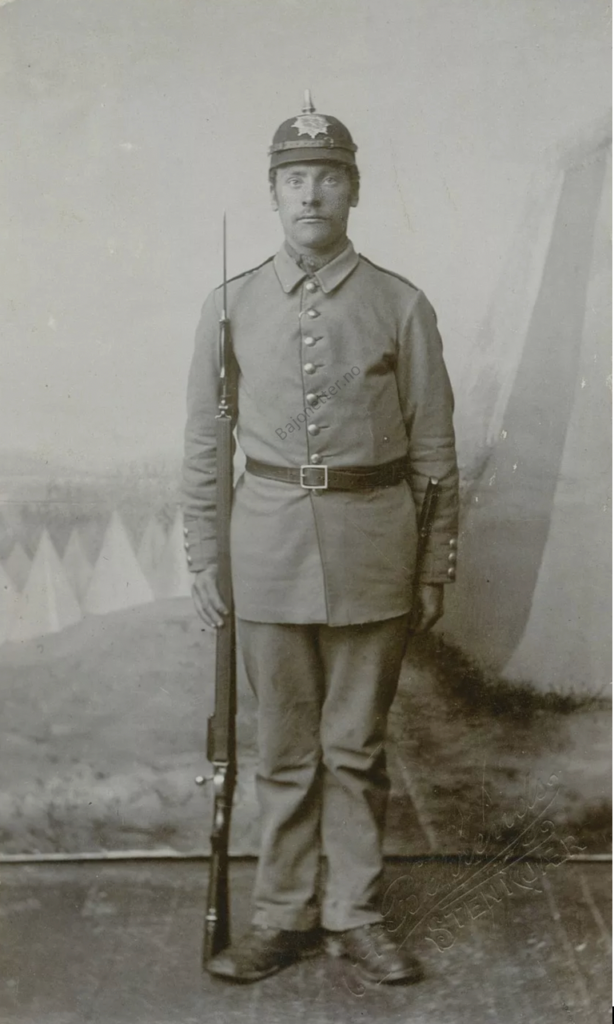 Below is will show some special or strange Krag Jørgensen bayonets that might be privately modified.

The bayonet below has a sewn brown leather cover on top of a normal M/1894 scabbard. Attached to the leather cover is a button showing the Norwegian coat of arms (the national lion). Sewn to the scabbard is a leather frog. The bayonet is a modified M/1916-bajonett. The bayonet has been shorted, ground and shaped to look like a knife. I am not sure if the bayonet ever so any military use. A previous owner was in the Norwegian National Guard (Heimevernet). The modifications is nicely made, but likely it is a homemade modification. 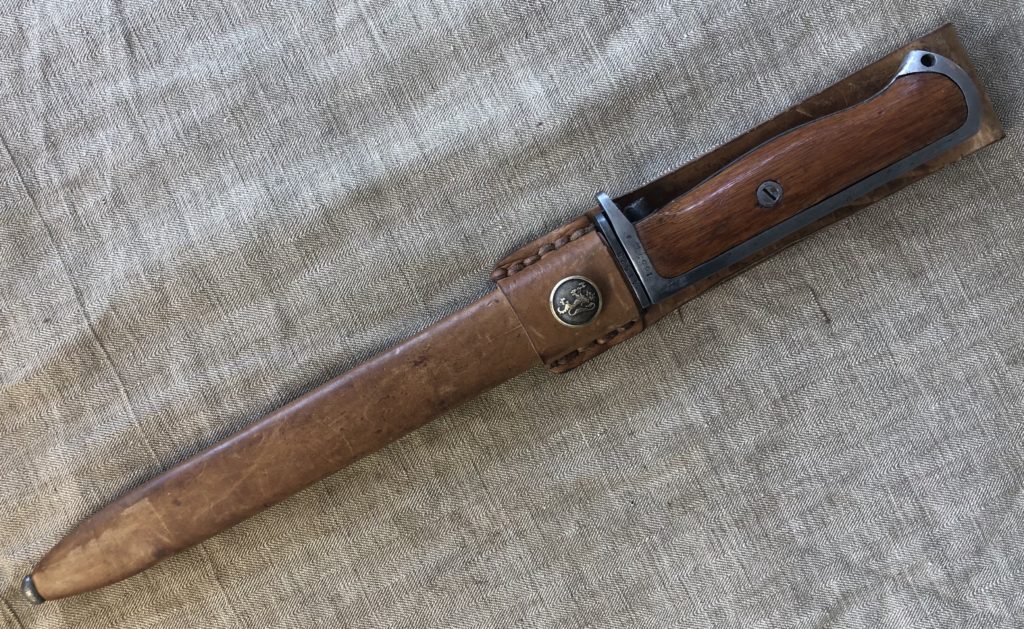 Chroming of old bayonets was in Norway common in the 70th and 80th in Norway. Worn out bayonets got chromed to give higher sale prices. The pictured bayonet shows signs of being sharpened before it got chromed.