The socket bayonet M/1860 was made for a percussion rifle designed by the Swedish General Lieutenant Fabian Wrede. The rifle was old fashioned already when it first was used in Sweden. The bayonet was also used for a number of change models.

M/1860 bayonet seen from above

Below is a list of firearms used together with the M/1860 bayonet. 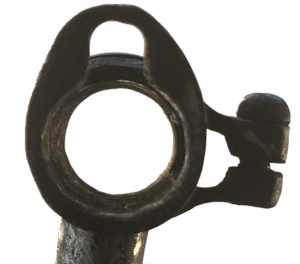 The bayonet type was produced at Husqvarna og Carl Gustaf Stad util 1864 when it was replaced by the M/1864 bayonet.

The bayonet was used with a black or brown (later ) leather scabbard.