The Minié rifle design became popular in the 1850th and 1860th. The earlier rifles had a problem with that the bullets only to a small degree was influenced by the rilles in the barrel. The advantage with the Minié-rifle, was that it got loaded with a new type of projectile, which was easier to load. The Minié projectile was a soft lead projectile with conical tipp and three rilles filled with grease, and a hollow base.  When the bullet was fired, the projectile expanded, resulting in better contact with the rifles in the barrel. The rifle along with other muzzle loading guns was made obsolete in the end of the 1860th. 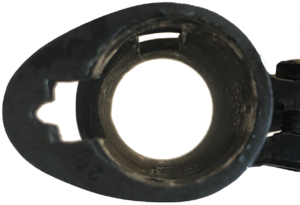