When the M/1867 Remington rolling block rifle was introduced, it was considered to be a big innovation, since it was the first rifle used by the military in Sweden and Norway that used metal cartridges. The rifle was produced on license by Carl Gustafs stads and Husqvarna in Sweden, and by Kongsberg Våpenfabrikk in Norway.

The Swedish Socket bayonet M/1867 was used with several different sub models of the M/1867 rifle in Sweden. 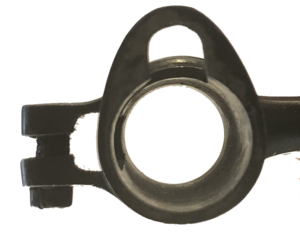 The blade of the bayonet has a cruciform shape. Hence the leather scabbard also got a “cruciform” shape, which separates it from the more common scabbard type used earlier in Sweden like the M/1860.

The scabbard got markings for the military affiliation

The Swedish Navy used a sword bayonet to the M/1867 rifle.

The bayonet got a serial number that matched the firearm stamped on the arm. The socket often got a stamp for the regimental number.