This bayonet was found in the ground in Skåne Sweden. On the socket you can see two holes where a Kyhl’s locking spring previous has been mounted. It is not easy to identify the bayonet, it looks similar to the Danish M/1808 and M/1822. But most likely it was a M/1822 because the length of the socket looks a bit to short to be a M/1808. 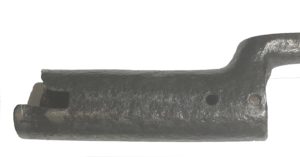 The blade of the socket is only about 365 mm, and it appears to be missing a piece at the point.

The end of the socket has been modified. See picture below.

The arm of the bayonet has been straightened.

On the picture above you can easily see that the bayonet has been modified. Per Holmbäck tells the the farmers in Danmark modified bayonets and hide them to defend them selves from escaped prisoners after a rebellion during the war in 1864.

The marked on the blade is not readable. But the bayonet most likely was produced at Kronborg Geværfabrik